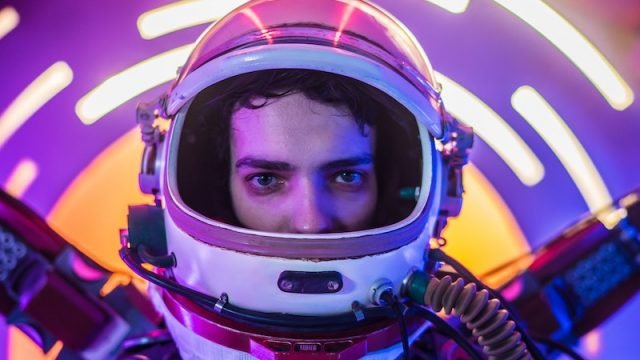 Seth Larney’s 2067 is an effective, entertaining bit of science fiction that dazzles the eye with brilliant visuals and simultaneously challenges the mind with a healthy dose of tangible ideas. The star of the film, Kodi Smit-McPhee, is no stranger to these larger-than-life tales having starred in Dawn of the Planet of the Apes as well as the recent batch of X-Men movies. ComingSoon.net had the opportunity to speak with Smit-McPhee about 2067, which you can check out below! You can also order your copy of the movie here!

Here’s the plot synopsis for 2067: When Earth’s air becomes unbreathable, a message from the future sends a man on a dangerous mission to an unknown world to save the human race.

Kodi Smit-McPhee: I would say I’m interested in sci-fi. I love things like 2001: A Space Odyssey and The Matrix, these things that can kind of give us a glimpse in our potential future, but also hold somewhat of a cautionary tale. But I’m also extremely passionate about nature and I’m greatly aware that the leaders and all of us haven’t necessarily put forth the awareness that we should towards the world and making it sustainable and things like this so that we can keep living in such a beautiful place. So it kind of melds all of those messages in one, and it gave me the opportunity to be within my own kind of Matrix or Space Odyssey.

Smit-McPhee: It’s insane. I think people are going to think that we based this movie loosely on 2020, but yeah, it’s extremely ironic that we were working on this and it ended right when all of this craziness started. So I mean, I think it adds fuel to the flame in terms of sparking people’s curiosity and the conversations that need to be had. If projects don’t do it, the leaders don’t do it, then hopefully entertainment can at a time like this.

CS: There’s a touch of Blade Runner in a lot of the visual designs. Was that something that was by design? Did you guys talk about that movie at all or have any other influences that you leaned on?

Smit-McPhee: Definitely, I think from Seth’s perspective. Obviously, that was an influence, but I don’t think it was Blade Runner specifically, I think it was a kind of image of cyberpunk and his own personal spin on that. But yeah, I mean, like I said, 2001 and The Matrix and Blade Runner, you can kind of mix all of these somewhat influences in this movie, yeah. It’s really cool to be a part of something like Blade Runner, though, like I love that movie.

CS: How difficult was it to work alongside the special effects in this movie?

Smit-McPhee: Honestly, not that hard. You know, I’ve been doing X-Men, you know, four hours of makeup and all that good stuff, just standing behind blue screens all day and it’s a crazy, crazy thing with explosions and stuff. And being like, motion capture and all of that and seeing stuff happen in front of you. But yeah, I mean, just to see how they pulled off all of that stuff, though, is absolutely a wonder to watch because of course, there’s a budget to this film and it’s not the blockbuster franchise like we do like The Planet of the Apes, so it was interesting to see how they really pulled this off in a very different way. I mean, most of the time we had one set and it would actually be aged throughout the shooting. So we shot consecutively so they could age the set. And they would’ve had to make two of them, so just little things like that, they kind of blew me away, how they kind of worked with it.

CS: How difficult was this character, Ethan, to play for you in comparison to maybe some of your other roles?

Smit-McPhee: I feel like it was definitely — I remember reading it and being like, I really want to do this, but it’s definitely going to hold a huge challenge for me in terms of the amount of dialogue. This dialogue, and most of the time it has to do with compression systems and I don’t know, just all this sci-fi dialogue. It’s really hard to keep your wits about you when you’re spitting big chunks out like that. But I just focused on the emotion. I focused on the intent and I focused on creating a life for this character, and that really motivated me to challenge myself and I picked it up. And yeah, I thought I killed it.

CS: What was it like working with Seth Larney? Did you understand his vision right from the get-go?

Smit-McPhee: I mean, obviously, I was blown away because I don’t know, I feel like I’ve just been waiting for something like this to arrive, and it’s not all the time that you can just wait for it and it comes to you, you know? You have to kind of actively look for these things. But this one just kind of came to me and reading it, I feel like it presented a concept so close to my belief and things that I’m passionate about. And I always make that a priority, whatever recurring theme through the movie that I choose, that I am very picky, but this one kind of hit the nail on the head. So yeah, it was special and it came to me, but I’m glad that I got it and the unfolding of it was equally as amazing. Yeah, it was all just very special.

CS: When you say that you’re picky about some of the projects that you take, what in particular about Ethan really drew you to that character?

Smit-McPhee: Yeah, Ethan, I mean, I feel like I somewhat relate to him in terms of, you know, just like, some tough things that he’s been through in his childhood. And then he’s also been called to a great mission. I mean, I feel like I kind of relate to that in many ways, just being a child actor in the industry coming from Australia. So I feel like he kind of, in an outsider way, depicted my life in somewhat of a sci-fi tale. So yeah, I mean, I loved that about it. But I mean, the question that we all have about faith and selfless actions, it kind of builds that question upon you, sir. Yeah, I like that. I mean, there’s a lot to be drawn in Ethan.

CS: What do you hope audiences ultimately take away from 2067?

Smit-McPhee: I hope that obviously people watch and enjoy it as a piece of entertainment. But ultimately, I hope it’s something that sparks discussion, that sparks curiosity in those that were watching. You know, maybe thinking about the current state of the world or just looking to the media and news and stuff and things like that. Yeah, I hope it sparks a wave of awareness, basically. And yeah.

CS: How important are films like 2067, films that stir the emotions and like you said, stir discussions?

Smit-McPhee: I mean, yeah, they’re extremely important. And I feel like sometimes these stories don’t necessarily make it through the threshold of Hollywood because they were trying to be a blockbuster. Hollywood is very opinionated so they don’t necessarily want to stir protests when it comes to a movie, they just want to make money. So I think it’s very gutsy and honorable and brave to want to express that message and pull it off in a way that makes it feel entertaining.

CS: Do you have any projects that you can share with us? Any word on whether or not you’ll ever reprise your role as Nightcrawler again in the future?

Smit-McPhee: I’d absolutely love to reprise the role of Nightcrawler, but still depends on waiting to hear from Fox/Disney and all of that crazy stuff that went down. So I don’t know a thing, but obviously, I would love to be a part of that again. And then, what I had worked on after 2067 was a movie called The Power of the Dog, which was directed by Jane Campion. And that was really special and a very theatrical kind of layered piece and I can’t wait for you all to see that. It’ll be on Netflix next year.