The Trial of the Chicago 7 Review: Energetic, Stylish & Powerfully Acted 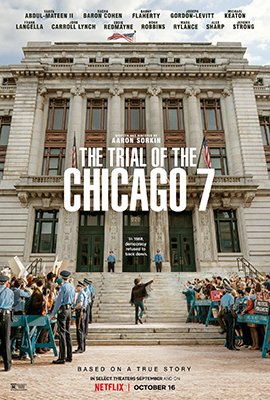 Written and Directed by Aaron Sorkin

The Trial of the Chicago 7 Review:

After years of penning a number of incredible films and TV shows over the years, Aaron Sorkin finally stepped behind the camera for the first time with his Oscar-nominated Molly’s Game and established himself as a talent to watch in the director’s chair and now he’s returned with his long-languishing historical drama The Trial of the Chicago 7 exploring the iconic titular court case and while it may have an air of general familiarity, he infuses the script with enough lively dialogue and character work and has assembled a powerful ensemble cast that keeps the affair afloat.

What was intended to be a peaceful protest at the 1968 Democratic National Convention turned into a violent clash with police and the National Guard. The organizers of the protest—including Abbie Hoffman, Jerry Rubin, Tom Hayden and Bobby Seale—were charged with conspiracy to incite a riot and the trial that followed was one of the most notorious in history.

Having first established himself as a theatrical playwright before turning to the screen, Sorkin was able to hone in on the necessity of a compelling story and cast of characters requiring few set pieces or spectacle to keep audiences engaged and much as he has with everything from his play-turned-film A Few Good Men to the Brad Pitt-led Moneyball, he once again finds a way to keep the film grounded while moving at a steady and quick pace that keep eyes glued to the screen.

The group of characters may be real people, but Sorkin finds a way to bring them to life with incredibly unique voices that feel as though birthed from a combination of meticulous research on his part as well as his own infusion of quick-witted dialogue that is fascinating to watch. The West Wing creator is no stranger to the biographical drama, and there are certainly a number of scenes in the film that feel like inferior recreations of past projects, but he finds a nice balance of dramatization and factual storytelling that is fascinating to watch, while also finding a number of powerful and heartbreaking parallels between the Nixon era and the modern day.

The 59-year-old storyteller also continues to prove he’s picked up a number of points from the incredible directors he’s worked with over the years to deliver a great-looking film throughout. The courtroom scenes are shot in a nice retro fashion of slow-sweeping pans, the protest flashbacks and moments involving Abbie Hoffman telling his tale to a captive audience utilize a handheld style that gives the scenes a captivating documentary feel.

Though it may have been a shame it took 13 years to bring this story to the screen, one of the brightest things to come from the delay was Sorkin’s ability to build the absolute perfect ensemble cast of stellar performers, both established and on-the-rise. Frank Langella, Eddie Redmayne and Mark Rylance are dramatic heavyweights and continue to prove their worth with their roles in the film, Joseph Gordon-Levitt may prove to be a little too quietly ambiguous but is nonetheless an enjoyable wild card and Sacha Baron Cohen nicely reins in his typically antic-driven nature for a plenty energetic but cool-headed Hoffman, but it’s recent stars Yahya Abdul-Mateen II and Jeremy Strong who steal the show.

With an ensemble of seven defenders, as well as compelling lawyers and politicians, it’s both understanding and a bit disappointing that Abdul-Mateen II’s fascinating portrayal of Bobby Seale isn’t granted more screen time or dialogue, but what he is given proves to be magnificent to watch and performed to perfection by the Watchmen Emmy winner. Speaking of Emmy winners, Strong may have been around in Hollywood and in the theatre world for the past 12 years, but between Succession and The Gentlemen it’s been great to see him finally getting the appropriate spotlight and his turn as Jerry Rubin feels primed for major award nods at the very least, if not actual victories.

The Trial of the Chicago 7 may occasionally suffer from slow pacing or genre predictability, but thanks to a sharply written and timely script, stylish direction from Sorkin and brilliant performances from its awards-worthy ensemble cast, this is a moving and powerful drama that rightly honors its titular subjects while opening audiences’ eyes to the numerous parallels between the past and the present.