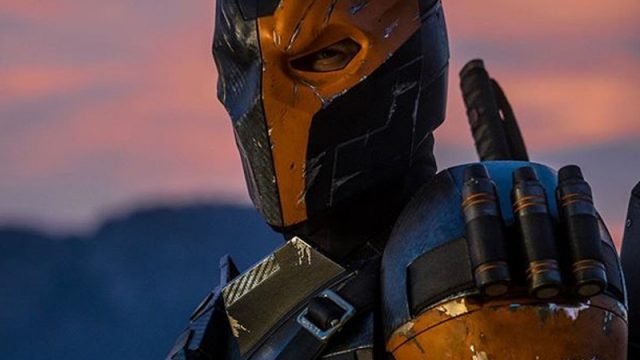 In a recent interview with Collider, actor Joe Manganiello talked briefly about his role as Slade Wilson, aka Deathstroke, in the original Justice League film — a part that was altered after Zack Snyder left the project and Joss Whedon stepped in to finish the film. While Manganiello refused to offer any new details, he did confirm the original scene will be restored in the cut.

“If I was a part of it, it wouldn’t be my place to announce that. That would be Zack [Snyder]’s place,” Manganiello said when asked if he was taking part in the Snyder Cut. “Whether or not that’s happening. That is an answer that’s below my NDA level.”

He then went on to discuss the original post credit scene.

“On my social media, I talked about [how] there was an original end credits sequence that was altered for the release of Justice League,” Manganiello noted. “Once Batman was cancelled, they altered that scene. So, here you go, but I wrote about that on my social media. There’s an original scene that will be restored to what it was originally.”

Yeah, that’s not a lot to go on, but, hey, it’s something. And he didn’t outright say he wasn’t involved … so, there’s still hope that we’ll get to see more of this particular iteration of Deathstroke. Also, why restore that scene if we don’t get to see the payoff?

Zack Snyder’s Justice League will reportedly cost around $70 million in order to properly finish the editing and visual effects of the director’s original vision, as well as the additional photography. The original post-production crew is also expected to return along with the cast members to record additional dialogue for the cut. It is expected to debut sometime in 2021.

Fueled by the hero’s restored faith in humanity and inspired by Superman’s selfless act, Justice League sees Bruce Wayne enlist the help of his newfound ally, Diana Prince, to face an even greater enemy. Together, Batman and Wonder Woman work quickly to find and recruit a team of metahumans to stand against this newly awakened threat. But despite the formation of this unprecedented league of heroes—Batman, Wonder Woman, Aquaman, Cyborg, and The Flash—it may already be too late to save the planet from an assault of catastrophic proportions.

Released in November 2017, the film earned mixed reviews from critics and audiences alike, praising the action and performances from Gadot and Miller while criticizing every other aspect of the film, namely the inconsistent tone that many fault Joss Whedon (The Avengers) for after taking over directorial duties from Snyder. With a large budget of $300 million and a break-even point of $750 million, the film is considered a box office bomb having grossed only $658 million.