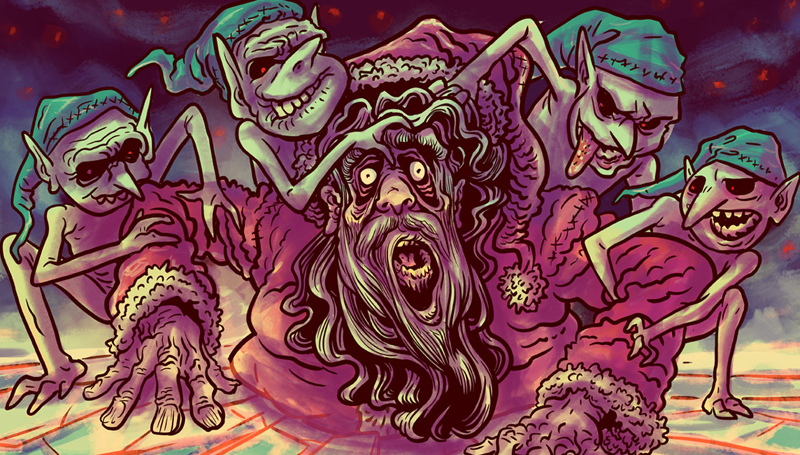 ComingSoon.net had the opportunity to chat with artist Alex Pardee about collaborating with Loot Crate on the new Loot Fright box and the characters he designed. The Loot Fright box is packed full of horror items featuring scary movie franchises, characters, and more, with a selection of 4+ fan-favorite horror items delivered every other month. Check out the interview below and click here to order the Loot Fright Box!

ComingSoon.net: I’ve been a huge fan of yours going way back. When I first started getting into illustration you were part of that wave of James Jean and Tomer Hanuka and Tara McPhearson and all those great people.

Alex Pardee: Yeah, you just named a bunch of people that are about a thousand times cooler than me but I love it. (laughs) Yes, but I am very, very honored to be included in that realm.

CS: You designed the new Krampus figurine for the Loot Crate box?

CS: Because you’ve done vinyl stuff before, how was this process a little different, because this is going to be produced probably on a much bigger scale than your vinyl stuff normally is, right?

Pardee: Yeah, the process itself wasn’t much different, but the thing that stood out about it to me was just what attracted me to the project was when Loot Crate reached out to me as far as like, “Hey we’re doing our Loot Fright boxes and we want to involve you somehow, like how can we involve you? And is there a property you want to try to license?” And so, I am such a fan of – in addition to doing pop-cultural art, kind of creating stuff, I also like to do my own stuff. So I saw this as an opportunity to kind of mash between the other and came to them with this idea of like, that I’ve been working on called “Monster Season”, which is basically creating new kind of twisted and more demented lore for these kind of universal holiday icons. Naturally, the first one was Krampus. I had never actually drawn Krampus before, which is weird because you’d think that I would have. But my version of this character Mr. Krampus is not the same Krampus. It’s slightly different. So I’m excited to unleash this little guy.

CS: Obviously this is going to be mass-produced, I’m sure it has to fit into a certain price point. Were there any limitations they placed on the design?

Pardee: Yeah, I mean, there definitely was because it had to be within a certain scale. It had to have not many points of articulation. There were definitely some limitations, but the cool thing about now is the technology is so advanced that we could almost do anything regardless of those limitations, right? So from a design end, there weren’t as many limitations as there were probably on the production end as far as we have to cheat this to scale, we have to choose these materials. We have to do this. On my end, there wasn’t.

CS: Do you see this as the first of several collaborations with Loot?

Pardee: Yeah, we’ve already worked on the next two, so I’m very excited about that.

CS: So it’s literally going to be a whole series of these holiday characters. I’m guessing there’s an Easter bunny in the works?

Pardee: Yes, there might be an Easter bunny in the works. But I also think it’s exciting because it’s going to be opulent. There’s enough things in there that we can totally get weird. I am really pushing for some weird holiday icons. So we’ll see. 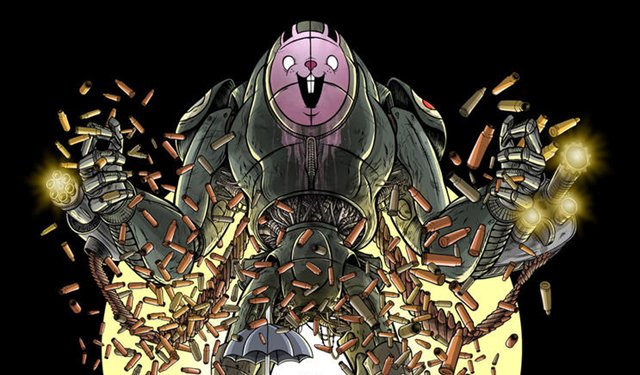 CS: And you already designed a bunny for the Mech-Suit in Sucker Punch, right?

Pardee: I did. Working on Sucker Punch, which is the Zack Snyder movie, was one of the most exhilarating jobs. And my job on it was like, tenfold as far as it started with just creating some marketing materials where they had no preproduction and I didn’t know anything, and then jumping back into it in mid-production, where they did already have some concept stuff. And then it was my job to punch things up and add things to existing designs and make them more like my stuff. So one of them was the Bunny Mech, which was to turn this thing into a big Japanese bunny mech, you know? (laughs)

CS: That’s the only film where Zack really wasn’t working from an existing IP. It was all being invented whole cloth. You designed the sword and you a lot of other stuff. Did that experience energize you about working on films? Is that something you still want to keep doing?

Pardee: Oh yeah, and that is something that I actually have been doing. The weird thing about Hollywood is not every project goes through, so a lot of the projects that I’ve done subsequent to Sucker Punch have not gone through, but I’ve worked on some really neat projects that I hope someday see the light of day. But yeah, I’m also always kind of pitching around my own kind of cartoons and live-action stuff, trying to write and trying to just have my foot in everything because I need to just keep kind of creating and keep building my own world because that’s what makes me happy.

CS: Can you tease any of those film projects or all they all top secret?

Pardee: Yeah, most of them are under wraps, but I am working on currently my new solo web art show I’m doing, which is going to be the first big gallery show that I’ve done in over five years. And what’s different about this one is usually for my big fine art shows I actually create narratives for them. And one of them that I did, Digging Up the Marrow, actually turned into a movie

CS: Yeah, that was like your kind of weird yōkai movie.

Pardee: (laughs) Yeah. It was my nod to Nightbreed. And so this is going to be the first time that I don’t create a new story or new IP. This simply is my world that I’ve been creating personally. So it’s going to be a very personal show, but that’ll be in December out here in LA. Because of the whole pandemic, there will be a lot of restrictions. A lot of it will be done virtually, but we’ll figure it out.

The Trial of the Chicago 7 Review: Energetic, Stylish &…