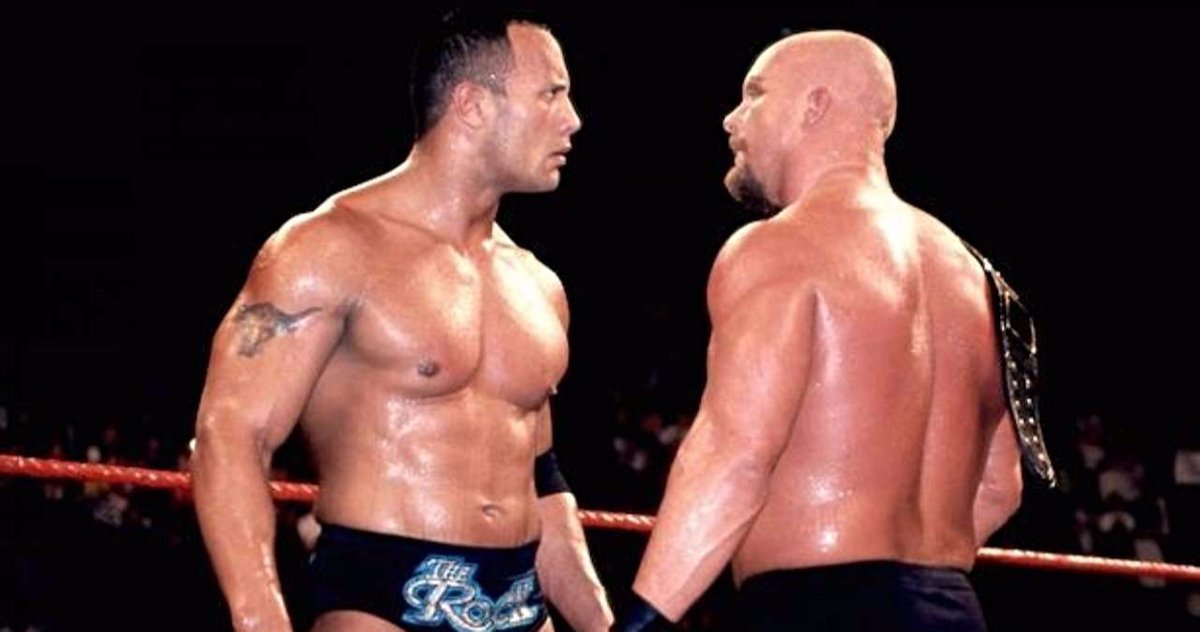 One of the greatest highlights of Dwayne Johnson’s illustrious wrestling career as “The Rock” was his colorful rivalry with fellow wrestler and alpha male Stone Cold Steve Austin. While the matches between the two dominant wrestlers were the stuff of legend, Johnson recently shared footage from some of their matches on Twitter with the revelation that he was trying to make Stone Cold laugh in the middle of the match in several of them.

Good Lord this was an awesome time in pro wrestling. Electrifying crowds! 👀
the crazy stunner bumps I would take started by me trying to make @steveaustinBSR laugh. If it weren’t for the crowds going batshit you could here Steve say “Jesuuuus Chriiist” 😂 🍻 #ohhellyeah@WWEhttps://t.co/xrUOqeDzrP

“Good Lord this was an awesome time in pro wrestling. Electrifying crowds! the crazy stunner bumps I would take started by me trying to make @steveaustinBSR laugh. If it weren’t for the crowds going batshit you could here Steve say “Jesuuuus Chriiist” #ohhellyeah @WWE“

The video shows Dwayne Johnson being subjected to the “Stone Cold Stunner”, Steve Austin’s signature wrestling move, in a plethora of matches. Each time after receiving the stunner, Johnson would flop dramatically towards the ground, seemingly so overcome with his own momentum that he appears to bounce from the impact.

Under normal circumstances, this type of “overselling” a move would be frowned upon, but the crowd is clearly loving Johnson’s extra-dramatic crashes, which the former wrestler has now revealed was done deliberately to make Stone Cold abandon his super-serious ring persona by breaking into laughter.

Of course, Austin was every bit as much of a professional as Johnson, and he did not visibly break character despite the latter’s persistent attempts. This same professionalism on the part of both wrestlers is what made them among the most legendary wrestlers in the history of WWE.

Interestingly, both wrestlers early on in their careers suffered from the same problems of starting out as “good guy” characters that the audience did not appreciate. While Austin was initially one-half of the cheerful wrestling duo of the “Hollywood Blondes” on WCW, Johnson debuted as the baby-faced wrestler “Rocky Maivia” in homage to his famous wrestling father and grandfather.

After discovering that the crowd was not interested in their clean-cut persona, both Austin and Johnson turned heel on WWE around the same time, and the rest is history. Crowds went wild for the brash, “I-don’t-give-a-fuck” attitude of Stone Cold, while the Rock proved himself to be the most verbally gifted trash talker in the history of the show.

Thus, whenever the two athletes met in the ring, fireworks were always guaranteed. The duo also tried their luck in Hollywood around the same time, where Johnson found much more success than Stone Cold. Still, despite their careers often pitting the two against each other, Steve Austin revealed last year that there had never been any bad blood between them behind the scenes.

“I gotta pick The Rock. He’s a very good friend of mine. We headlined three WrestleManias together. No one ever has done that. He’s the biggest movie star in the world. Me and that guy…he brought out the best of me. I brought out the best [in him] and, you know, there was that instant chemistry that drew tons of money. So a conversation with that man would be electrifying, no pun intended.”